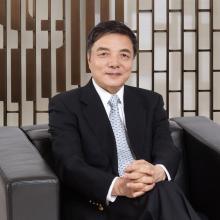 Mr Ju Weimin is Vice Chairman, President and Chief Investment Officer of CIC. He is reputable for his excellent work in one of the most important phases of CIC’s development since 2015.

Mr Ju plays a leading role in navigating CIC towards becoming a respected sovereign wealth fund and building up the company’s institutional investment capabilities. He is responsible for the strategic orientation of CIC’s overseas investments and oversees most of CIC’s investment committees and operating units. Under Mr Ju’s leadership, CIC has refined management, optimised investment strategies, and progressively increased prudent investment in alternative assets. As a result of these endeavours, CIC's investment performance has significantly surpassed its 10-year target and realized a double-digit 5-year cumulative annualised return. The company’s total AUM has surpassed the milestone of $1 trillion.

Mr Ju actively promotes CIC’s international exchanges to realise mutual benefit with partners. Robust measures have been taken to expand global outreach under his leadership. He personally led CIC’s engagement in the International Forum of Sovereign Wealth Funds (IFSWF) to advance the development of the Forum and strengthen the SWF community He also served as, among other positions, Co-Chair of the Trade and Investment Taskforce of B20 Saudi Arabia and Co-Chair of the Financing Growth & Infrastructure Leadership Taskforce of B20 Germany, aiming to advocate an open, fair, and nondiscriminatory international investment environment

Prior to joining CIC, Mr Ju had acquired profound experience in China’s market and superior expertise in enterprise management during his 30-year tenure at CITIC, the pilot for China’s economic reform and opening up. Mr Ju held several leadership positions at CITIC Group and its subsidiaries, including Executive Director, Vice President and Chief Financial Officer of CITIC Group. Mr Ju holds a master's degree in economics from Renmin University, China.